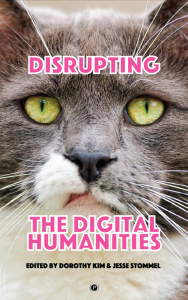 The captains at the helm of Disrupting the Digital Humanities—Dorothy Kim (editor), Jesse Stommel (editor), and Eileen Joy (publisher)—arrive with convictions. Kim’s Digital Whiteness and Medieval Studies (2019) argues that medieval studies has been “complicit in the construction of the historical and critical category of whiteness” and that medievalism “has become a fertile ground for white supremacists.” Stommel, the Director of Hybrid Pedagogy: An Open-Access Journal of Learning, Teaching, and Technology and Co-founder of the Digital Pedagogy Lab, has been an outspoken advocate for students, insisting that “grades are the biggest and most insidious obstacle to education.” Joy, well-known for her work on the edgy journal Postmedieval and as the ringleader of the medieval rabble-rousers known as BABEL, dropped professordom like a bad habit to start Punctum Books, a bastion for unconventional publishing whose tagline is “spontaneous acts of scholarly combustion.”

Disrupting the Digital Humanities seeks to rethink how we map disciplinary terrain by directly confronting the gatekeeping impulse of many other so-called field-defining collections. What is most beautiful about the work of the digital humanities is exactly the fact that it can’t be tidily anthologized — that it’s messy and pushes in uncomfortable ways. The desire to neatly define the digital humanities (to filter the DH-y from the DH) is a way of excluding the radically diverse work that actually constitutes the field. Ultimately, it’s exactly the fringes, the outliers, that make the digital humanities both lovely and rigorous. (Kim and Stommel 20)

Disrupting the Digital Humanities presents the field not as an avant garde school of bright stars—thank goodness!—but a gathering of ideas counter, original, spare, and strange.

The star system has been and will continue to be an obstacle to such collectivity. The star system depends on fans, an impoverished community focused on individuals who are not part of the community. It would be better for literary scholars, teachers, and students to stop being fans and to recognize that they can authorize knowledge without the name of a father or mother. (“The Star System in Literary Studies” 98)

If theory was hierarchical and exclusive, the digital humanities—in its admirable moments—empowers collectivities over academic cults of personality.

Collectivity, inclusivity, and community are central to Disrupting the Digital Humanities. If the author list seems too long—well, that’s kind of the point. This is a book for the digital humanities masses. Its formidable heft belies short, accessible chapters written in plain English. Stommel envisions a digital humanities that is:

constantly interrogating itself, but never at the expense of bringing non-academic, non-specialist voices into the conversation…It’s not that we need to do this work in bigger and bigger tents but that we need to move outside tents altogether. This is what I have called humongous tent digital humanities.” (86-7)

There is something here for everyone because this volume has a diverse cast. That also means the authors often disagree. One author sees the digital humanities as an opportunity for social justice while another points to its exploitative labor practices. Some describe Twitter as the glue that holds together the community; others see it as a form of algorithmic oppression.

While some authors voice concerns about digital humanities exclusivity, most do acknowledge that—at least, for academia—the digital humanities is exceptionally inclusive. For Sean Michael Morris, inclusivity is at the heart of disruption, “Inclusion is disruptive precisely because it does not level the playing field; rather, it points out how uneven that field is, and also that the game we’re playing may not be the right game at all” (224). No kidding. I can’t tell you how refreshing this perspective is for those of us who came of academic age on big theory conversations about inequality. We were primed to change the world only to discover we didn’t have a seat at the table. Few things are more frustrating than the way some of our colleagues—especially those with the most secure positions who claim to be doing radical political work—bury their heads in the sand when confronted by the systemic inequality of higher education. Ethical humanities work requires more than pontification: Please grab a shovel. Moya Bailey hits the nail on the head when she, channeling the Research Justice Collective, impugns, “Is this just research or just research?” (244).

One of the most refreshing aspects of Disrupting the Digital Humanities is the way many authors view the digital humanities as a practical force for social good. Kat Lecky takes a very pragmatic approach:

For many of us, the ideal endpoint of a humanities education is to train our students to step into society as active and engaged citizens of the world. This goal is fundamentally pragmatic, of course, since the good life in this case necessitates the transition from uncritical subjecthood to civic engagement, to action in the world. Humanist pedagogy thus works best when it aims not for transcendence but utility, and for lived experience rather than abstraction. The field of digital humanities is the terrain upon which we may best embrace this prosaic, everyday approach to humanism. (375)

We desperately need more practical, public work in the humanities. The humanities toolset can help everyday people live fuller, richer lives, but we have to recognize our work is often inaccessible to the public. Stommel makes this distinction clear, “Doing public work is different from making academic work public. Available is not always accessible” (85).

For those toiling away on the tenure-track, one of the most significant challenges for attempting this kind of socially-transformative work is the narrow confines of institutional tenure and promotion guidelines. (This is a well-known issue, and articles on receiving credit for digital humanities work are among the most popular genre pieces.) This tension between academic labor, product, and credit is the subject of Robin Wharton’s chapter, “Bend Until it Breaks: Digital Humanities and Resistance,” perhaps the most thought-provoking in the entire volume. Wharton describes the genre-bending products of digital and public humanities work as acts of scholarly resistance:

When digital humanities scholars make scholarly artifacts, when any scholars make scholarly artifacts that don’t conform to aesthetic expectations baked into the law (or into more localized regulatory apparatus such as campus intellectual property policies or review, promotion, and tenure procedures), they are potentially engaging in a kind of resistance…Similarly, when digital humanities projects establish new working relations among collaborators that not only ignore but in some cases actively defy institutionalized hierarchies of labor, we create pockets of jurisdictional uncertainty where regulatory assumptions about whose contributions will count for what and why are called into question. (385)

In the tenure rat race, there are really only two things that count as scholarship: books and articles. What an impoverished view of the humanities this is! The community archive can be more significant than the monograph. Working with the underserved is more socially significant than getting picked for the choicest journals. I dream of a day when humanities professors are as likely to be introduced by their community projects as their book titles.

If we examine the social impact of our work, then undoubtedly our students are more significant than our articles. Why then do our students so often labor in precarity for our projects? In four chapters of Disrupting the Digital Humanities, Moya Bailey, Kathi Inman Berens, Laura Sanders, Liana Silva Ford, and Spencer D.C. Keralis tackle the systemic labor issues of higher education head on. Ethical digital humanities work depends on our ability to be fair about labor, wages, and credit. These may be the most significant ethical issues confronting the digital humanities today.

If there’s a criticism I have of Disrupting the Digital Humanities, it is that not all of the chapters are equally polished. The editors should be applauded for bringing together many kinds of writers, including some that are significantly more junior. Their writing has a vitality and urgency that is inspiring, but it is not always well-informed about the debates and histories of the field. We get retreadings of now-ancient debates like “hack vs. yack” and a few too many quotes about Stephen Ramsay’s vision of a digital humanities where everyone must learn to code. Still, there’s far more laudable than questionable material here, and I can’t fault writers for making old debates more accessible to new readers. Even digital humanities veterans will appreciate the candor of the emerging discussions on display. Disrupting the Digital Humanities more than makes good on its title premise. It is the most significant book on the digital humanities in 2018.

1 thought on “Not Your Daddy’s DH: A Review of Disrupting the Digital Humanities”