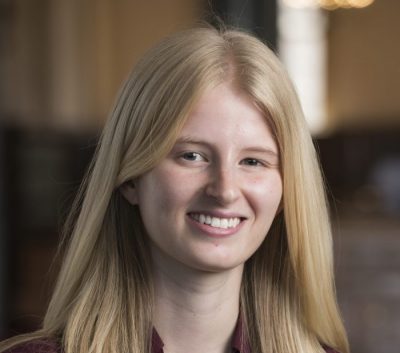 Kristina Bush is a writer, content manager, and project manager for the Triangle Digital Humanities Network behind-the-scenes. She graduates this May from the School of Information and Library Science at UNC Chapel Hill with her Master’s in Library Science, and will be starting a new position as the Digital Literacies Librarian at University of California, Berkeley in the coming months. Since Kristina is leaving the Triangle area and TDHN for the sunny shores of California, she took the time to tell us about her experiences with DH and TDHN:

What is your background with digital humanities, how did you first learn about it?

I actually didn’t hear the term digital humanities until I was already deep into a DH project. I joined Michael Penn and Nick Howe’s Mellon-funded Modern Technology / Ancient Manuscripts project as a sophomore at Mount Holyoke College. I had just declared myself a Medieval Studies major and under the advice of a fellow student, enrolled in Michael Penn’s Intro to the New Testament course. I found out about his Modern Technology / Ancient Manuscripts project by chance in an article in the Mt. Holyoke newspaper and immediately approached Michael, asking how I could be involved. In 2014, the project was collecting digital images of 4th – 10th century Syriac manuscripts and uploading them to an interface designed by Smith College’s Nick Howe to identify letter images. My job was to learn Syriac letter forms and identify them on the interface so that we could collect enough images to perform some comp sci magic and create a timeline of Syriac letter forms as they developed in each manuscript over time. I continued to work on the project for years, my role evolving from letter identification to letter image editing to training new research assistants to supervising their work and finally, analyzing the results as my senior thesis. It was after a full year on the project that Michael explained to me what digital humanities research was… soon after I became a (public history, museums, archives, and) digital humanities minor… one of the first at Mt. Holyoke!)

I wanted to learn about how this project fit into the broader picture of digital humanities research and learn what other people in this newly discovered (to me, at least) field were doing. I applied for and received a 5 College Digital Humanities Fellowship which funded my thesis research into Syriac paleography and a trip to Washington DC to meet with professionals at the Folger and the Smithsonian about their work on DH projects. I don’t have words to describe how inspired I was by the raw potential of digitized collections. My mission in life became to make library, archive, and museum resources available to the public so that DH research could be made possible. That’s how I landed in library school, wanting to bring DH potential and excitement to students everywhere – an optimistic goal, for sure, but one that I hope that my work at the TDHN has helped me move toward.

What digital humanities tools are you currently working on/recently used for any projects?

I took two Python courses at UNC, one of which dealt a lot with data, which I think is very useful for DH. I have also done some work recently with Tableau and R to create data visualizations. I have a very long list of tools that I’d like to learn that I’m hoping I will be able to work on at the TDHI.

How and why did you get involved with TDHN?

I came into UNC’s School of Library and Information Science with DH at the core of my desire to be a librarian. I was placed in the Art Library as a part of my assistantship, and while I absolutely love my work at the Art Library, I missed doing DH. In the spring of 2018 I met with Nathan Kelber, who suggested that I join him in restarting the Triangle Digital Humanities Network. At that time the TDHN was just an idea and we were still in the data collection phase of the project. That summer, I helped Nathan put together lists of people involved with DH, spaces dedicated to DH, and DH projects in the Triangle – the ones that you now see on the TDHN website! In the fall, I got to talk with new TDHN members about community building, our excitement about DH, and the (seemingly far-off) institute. I loved being in a room with people who were all as excited as I was about connecting people with other digital humanists, tools, resources, and support. Joining TDHN felt like the mission that I had entering library school was starting to come to fruition. I have loved being a part of the TDHN community and I am so happy that I was able to get involved right at the start.

Where are you off to next?

I have just accepted the role of Digital Literacies Librarian at University of California, Berkeley. I’m sad to leave the TDHN, but I hope that I will be able to find a similar community of practice in my new role.

What’s your dream DH project (if you could work on anything with any skill set in any field, what would it be?)

That’s a tough question. My immediate response is to see the Syriac paleography project go entirely machine learning. Take a digital manuscript image, sort the letter forms, find aberrant letter forms, match those against the database of other unique letters – BAM – you’ve identified a scribe. Wouldn’t that be amazing?

What I would really like to see is open online access to archives, libraries, and museums across the globe so that anyone anywhere can have access to cultural heritage materials. I was so inspired by working with digital images of Syriac manuscripts and I just want others to have that same opportunity. I want people to find the collections that they connect to and be able to come up with crazy DH projects and complete them. I want to be the facilitator, not the doer, and that’s why I’m a librarian.

Do you have any words of wisdom as you depart the TDHN team?

Working at TDHN has been a wonderful experience. I have so enjoyed getting to meet community members and hear about the fascinating projects that are going on in the Triangle and beyond. It is so gratifying to work in an environment where everyone is excited about DH and supportive of each others’ struggles and successes. I want to thank Nathan and Claire for being so dedicated and hard working. It has been a joy to serve the TDHN community with the two of you.

Words of wisdom… Darius is our benevolent robot overlord. All hail Darius!

We’re sad to be losing Kristina from our team and from the network, but we’d like to wish her the best in her future adventures! Thank you for working with all of us in the Triangle DH Network!

NC folks: Save the date for a mini virtual Digital Humanities Collaborative Institute on dh pedagogy & remote learning (7/17). Have ideas to share with other educators? Check out the lightning round CfP! #dhcollabnc