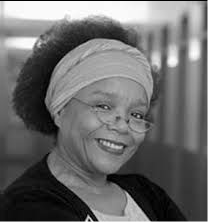 By Stuart Parrish and Dr. thomas-houston

Scholar marilyn m. thomas-houston will deliver the keynote address on Thursday, October 24 at 9:00 AM to launch the fall 2019 Triangle Digital Humanities Institute.

Currently at the University of Illinois Urbana-Champaign and a faculty Emerita holding joint appointments in Anthropology and African American Studies at the University of Florida (2001-2015), thomas-houston edited transcriptions of taped discussions and position papers by key Black Studies scholars from a 2006 Ford Foundation convening, Conversations for Sustaining Black Studies in the 21st Century, that she organized. Her publications include ‘Stony the Road’ to Change: Black Mississippians and the Culture of Social Relation published by Cambridge University Press (2005) and Homing Devices: The Poor as Targets of Public Housing Policy and Practice edited with Mark Schuller and published by Lexington Books (2006). In her duties as Outreach Coordinator for the African American Studies Publishing Without Walls (AFRO PWW – https://pww.afro.illinois.edu/index.html) series of the Mellon Foundation-funded University of Illinois at Urbana-Champaign project, thomas-houston conducted workshops, gave presentations and acquired publications. She is also editor of Fire!!!: The Multimedia Journal of Black Studies.

In a telephone interview Dr. thomas-houston shared her thoughts on the fall 2019 Institute’s theme #RepresentationMatters.

“Well, anthropology is all about representation to begin with!” she began. The scope of her scholarly work includes her specialization as a visual anthropologist, she points out, and this focus comes to bear across diverse uses of digital tools, including online publications and documentary productions as well as teaching how to use these tools and platforms for disseminating Black Studies and humanities scholarship. Two key issues she addresses on the topic of representation are “who is to represent whom, and how?” “Anthropologists represent the cultures and societies from the point of view of the actual people they are studying” says thomas-houston, “Rather than an ‘outside looking in’ perspective, they analyze from the inside, when explaining how things operate.”

Along with Co-PI Ronald W. Bailey, Dr. thomas-houston’s work with the AFRO-PWW project entailed presentations at annual meetings of the Association for the Study of African American Life and History, (ASALH/asalh.org), the National Council of Black Studies (https://ncbsonline.org), the College Language Association (https://www.clascholars.org) and the HBCU Library Alliance (http://hbculibraries.org) and hands-on workshops at such institutions as North Carolina Central University, Jackson State University, Savannah State University and D.C. Public Library.  AFRO PWW serves scholars, authors, educators, and librarians at Historically Black Colleges and Universities (HBCUs) across the south by teaching them how to use the open source platforms Pressbooks, Scalar, Omeka-S, and Open Journal Systems and and providing technical and editorial support for projects accepted for publication throughout the process. The current publications in the AFRO PWW catalog can be found at https://iopn.library.illinois.edu/books/pww/catalog/series/afropww. Dr. thomas-houston emphasizes that the project’s guidance of authors and its peer review process help distinguish their publications from blogs, social media, and personal websites that generally do not meet peer-reviewed standards.

In line with her effort to bring digital technology to the front of representing Black experiences, thomas-houston and Daryl Michael Scott co-founded Fire!!!: The Multimedia Journal of Black Studies published by ASALH and distributed through JSTOR. She describes it as “the first journal of its kind and it also is peer reviewed.” An interesting note is that the journal takes its name from the Harlem Renaissance journal of the same name (Fire!! with two exclamation points) and Zora Neale Hurston was a contributor. Hurston was hired by James Shepard to teach drama at NCCU from 1939-1940. Different modalities make the journal interactive. It allows scholars to boost their arguments or prove the theory they are putting forth. Dr. thomas-houston also points out: “Most people don’t know that there were black scholars, some from Harvard University, at the turn of the 20th century writing about Black life.” She wants to emphasize the importance of their work, and the original purpose of Black Studies, which was to support “Academic Excellence and Social Responsibility”. She describes the field as being established as a corrective measure led by Black intellectuals in the African Diaspora, and that tradition should continue in this Digital Age.

We look forward with anticipation to Thursday and congratulate our hosts and the NCCU Faculty Planning Committee on choosing and arranging such a promising speaker. marilyn m. thomas-houston’s keynote #RepresentationsMatter: Intersections of Digital Technology & Black Experiences is not to be missed!

The Institute’s schedule has been finalized: http://triangledh.org/tdhi/