Helen Burgess and Maggie Simon, both English professors at NC State, recently published their project Intimate Fields as part of the Kits for Cultural History series through The Maker Lab in the Humanities (MLab) at the University of Victoria. Check out the original publication here, and read about the project in their own words below: 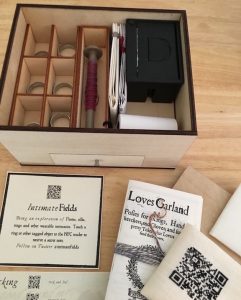 How did you conceive of Intimate Fields?
We conceived of the project over coffee when we met to discuss a piece Maggie was working on for thresholds journal concerning seventeenth-century posies (read the article here). Helen brought up her recent discovery of NFC smart rings which allow wearers to program text into the rings. This lead to a discussion of inscribed/communicative objects. Helen had been wanting to create a kit project for University of Victoria’s Kits for Cultural History series and had been thinking about using the rings to communicate with Twitter. Our shared interest in posies, short poems used on gift objects during the early modern period, and their contemporary analogues (Tweets, the NFC rings) led to the genesis of our kit.

How did you decide on which technologies to use in the project? What brought you to physical computing and fabrication?
We were focused on technologies that are close to the skin and can communicate both at close and long range, technologies that play with distance and presence (and we define both the contemporary and historical elements of out texts as communicative technologies). We were also fascinated with technologies that engage multiple senses—touch, smell, even sound. The idea that we need to be present for communication runs counter to many narratives we have about digital technologies and we felt this project could serve as a provocative intervention. The thermal printer and Twitter elements are part of an ongoing sequence of projects that Helen has been developing on the subject of printing bots and love notes (read about an earlier project, MashBOT, here).

What, if any, obstacles did your project face?
Our first issue was fabricating the box. It was hard to laser cut the box components since the birch material would catch on fire. We made several prototype boxes in our makerspace and ended up using a birch plywood with a veneer which we had cut commercially. We also faced the anxiety of making things that would function within the kit—spinning silk, folding letters, creating hand-created elements that would fit well with the reader technologies. Re-creating Loves Garland was difficult because we worked from digital scans. Re-creating a book from a digital scan is very different from making a book based on quires. Twitter also has traffic restrictions which meant users would be limited in how frequently their ring could communicate on the platform. It was also a bit uncomfortable to use fire to melt the wax for our letter seals whilst in the office. Reconciling the handmade nature of certain components with our own preconceptions about completion and aesthetics was (and is) a challenge. 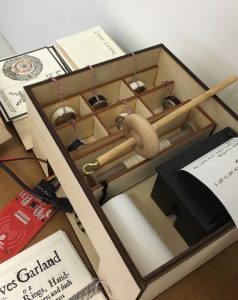 How has the project changed and evolved over the process?
There is an accretive quality to the box itself—you keep wanting to add components and create new ways of encountering the posies, but the box is pretty small! We also want to refine elements and make it more finished, which in some ways works against the theory of the kits themselves. We also foresee the obsolescence of certain components as the project ages– our code will have to be re-done when Twitter changes its API and we may have trouble finding another PN538 RFID reader. The kit itself is also rather fragile, just held together with glue. We hope this speaks to the lost objects the posies themselves come from, and that the kit’s vulnerability is part of what makes it beautiful.

If you had to describe the project in 5 words, what would they be?

What’s your dream DH project (if you could work on anything with any skill set in any field, what would it be)? 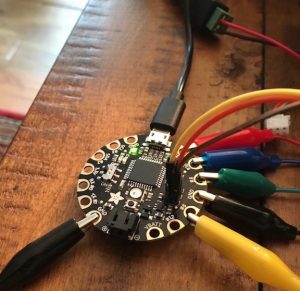 Helen would like to create a room for making the kit that is also an iteration of the kit itself, with printers and sensors embedded in the walls.

Maggie would love to teach a course where students can reasonably re-create, collaborate, and innovate on the kit. It would be a real chance to work through issues of assembly, commercialized elements.