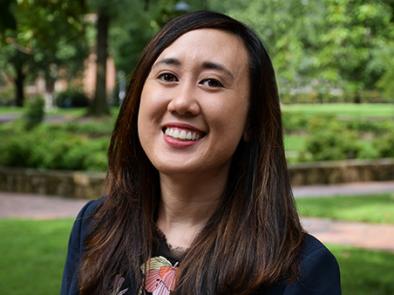 Maggie Melo is an assistant professor at UNC’s School of Library and Information Science where she teaches courses on information resources and services, information professionals in makerspaces, and information ethics. Before coming to UNC, Maggie completed her PhD in English at the University of Arizona. While there, she became actively engaged in makerspace research and the development of inclusive and equitable learning spaces in academic libraries. Maggie co-founded the University of Arizona’s first publicly accessible and interdisciplinary makerspace – iSpace, and also founded the Women Techmakers Tucson Hackathon, the Southwest’s first all-women hackathon.

Maggie took the time to tell me about the first time she encountered a makerspace, what it takes to build a makerspace from the ground up, and some of her favorite tools, technologies, and strategies (both for makerspaces and equity and inclusion).

Tell me about your first experience in a makerspace.

The first makerspace I visited was Xerocraft– a community makerspace located in downtown
Tucson nestled amid art galleries, breweries, and a set of train tracks. I walked in and was awe
stricken. I remember seeing a DIY ‘80s arcade that was powered by a credit card sized computer
(Raspberry Pi) when I first walked in. I also sharply recall feeling all the cognitive dissonance
holding my first 3D print: how did this plastic frog emerge from that boxy contraption?

I had this strange feeling, this will sound cheesy, that I entered a space that was bigger than any
one of us individuals. It was a unusual third space. People came together to participate in
something so fundamentally human: to share ideas, tools, expertise, and their passion for
amateur making. And I use the word amateur in the etymological sense that there was an
evident love for making for making sake in that space. I felt like I walked into the heart of
Tucson — a community of artists, entrepreneurs, mothers, teachers, and local government folks
all in one space. It felt like, to me, the lifeblood of this city. It was then that I began to feel close to Tucson as a community and soon my own place attachment to Tucson began to take root
(this was important to me as then recent transplant to Tucson). I was inspired by the different
projects, and especially the volunteers who dedicated their time and expertise to keep the
space running.

Honestly, it was daunting. I remember walking into a newly emptied office in the
Science-Engineering library and was shocked to hear that this room would house the
university’s first interdisciplinary makerspace. Designing, better yet *thinking* about designing
the makerspace invoked the same sort of anxiety I feel as a writer when I’m sitting with a blank
page. I wasn’t familiar with what a makerspace was, what goes in one, and was unsure how this
new service could be marketed to the campus. We, the co-founders, didn’t know where to
start. Luckily we worked alongside a dynamite team of colleagues spanning from the libraries,
digital humanities (College of Humanities), and entrepreneurship (Innovate UA).

Designing a makerspace also inspired my research and teaching. I was an English PhD student
that had the rare (and oh so humbling) opportunity to work and design this informal STEM
learning environment. The makerspace extended my humanist inquiry into equity and inclusion
in many generative ways.

What’s one piece of tech or tool that you think should be in every makerspace?

I don’t think I could say enough about how incredible laser cutters are! They are so versatile.
I’ve seen laser cutters used to make an assortment of artifacts including earrings, game pieces
and boards, family portraits, name badges, catapult parts, and more. I love the possibilities that
a laser cutter affords, and as an added bonus the aroma of a laser etching and cutting into
wood is quite nice.

A makerspace extends a suite of research tools and technologies for students to apply to their
research questions– this inadvertently gives way for innovative responses and findings as well!
Making opens different pathways for student research. I’m reminded of what leading scholar
and civil rights advocate, Kimberlé Crenshaw said about problems without a name — they can’t
be seen, problematized, or solved (“The Urgency of Intersectionality” 2016). As a researcher,
I’m consistently trying to name, challenge, and move the needle on equity and inclusion issues
that occur at a visceral, affective level. When words aren’t effective, I’ve found that VR world
building, data visualization, and composing across media helped me as researcher give name
and form to problems. Making and composing beyond the alpha numeric helps me name and
visibilize problems. Any student from any discipline could benefit from this, but I especially
think that non-STEM majors are increasingly interested in makerspaces because of the creative
pathways for meaning making that are afforded.

Beyond the classroom, I think students should be interested in making because it empowers us
to engage with our world differently. Learning how to 3D print, how to sew, or how to world
build in virtual reality transforms how we envision what’s possible. We aren’t simply
consumers, but through making become what Alvin Toffler calls prosumers (portmanteau of
producer and consumers). I love it when students learn a skill like sewing and tell me about the
pants they hemmed or the shirt hole they mended — it’s thrilling to imagine a world where we
are empowered to fix rather than buy or throw away. To make is to be a part of a world you
could actively create and re-imagine.

How do you promote diversity and inclusion in a makerspace and/or through making?

Although making is an inherent part of our humanness, I am also aware that current
conceptions of ‘making’ have undergone a sort of re-making with the advent of the Maker
Movement. This social phenomenon is a DIY extension of making that focuses primarily on
technology which is awesome! However, it’s also limiting because these newer conceptions
tend to attract a narrow base of users. As such, It’s not enough to just promote equity and
inclusion in a makerspace, it needs to be intentional, sustainable, and designed into the
makerspace from the ground up. That is, hiring practices, training and development, and the
creation of core values that are foundationally equitable. It’s also about meeting people where
they are.

POC are historically underrepresented in this group and this needs to change, but it won’t
change with a simple sign or workshop. In order to create an inclusive space, POC should be
able to see themselves in that space, and have a space that values their making practices. I am
currently working on a program of study that investigates how a makerspace communicates its
value, purpose, and targeted audience by virtue of the way technologies are organized in the
space, the collection of technologies available, and the staff running the informal learning
environment. This program of study investigates the emotional and affective reactions that a
university makerspace induces in potential users, and in turn examines how a makerspace’s
layout could be augmented to convert potential users into actual users.

What is your dream project? It could be a makerspace itself or something you would make
there?

I would love to develop a project centered on empathy and gender bias. Specifically a project
on what it feels like to experience gender bias and microaggressions within an informal learning
environment like a makerspace. To do this, I would use one of the best empathy generators out
there: virtual reality. What gets me excited about VR is that it’s incredibly immersive. VR is a
powerful medium to see gender microaggressions unfold, and now VR literally allows users to
feel their VR experience. Haptic vests, sleeves, and face masks are comprised of sensory points
that afford a visceral experience to users. When users wear haptic VR gear they could feel
something as small as a tap on the shoulder to a full-on hug. For this project specifically, users
could feel a racing heart through a haptic vest, could experience tunnel vision through the
headset, and could hear the persistent thoughts and narratives of unbelonging and imposter
syndrome through the VR audio. This project elevates that popular adage about walking a mile
in one’s shoe by allowing users to develop a auditory, visual, and haptic experience associated
with experiencing gender bias within an informal learning environment like a makerspace.